Let’s understand a few key terms used in the cycling world while talking about drivetrains!

The front cranks and chainrings of a bike are linked to the rear cassette through a roller chain (made up of carbon or alloy steel) that transfers the pedaling force applied by the cyclist to the rear wheel. The more the rider pedals, the more the chain moves and vice versa.

Can be threaded or pressed into a shell that houses a spindle and in which the bearings fit.

A bike cassette is a set of many sprockets attached to the rear wheel hub through a threaded lockring. It is also referred to as a Cogset or Cluster. These sprockets or cogs are put together in ascending size.
Cassettes can look almost similar to Freewheels but have different mechanisms.

Usually, Cassettes have 5 to 13 sprockets. The purpose of cassettes (in collaboration with the derailleur) is to give multiple gearing options to the rider.

Sprockets with more teeth are called larger sprockets and running the chain on these gives ease in pedaling and is thus called “easier Gear”. A rider would, however, need to pedal more on the easier gear to cover the same distance if they were on smaller sprockets. The largest sprocket is close to the wheel.

The ones with smaller teeth are called smaller sprockets.

The sprockets are numbered as follows:

There are 2 types of cassettes:

A Road bike is not required to make high jumps in gears like a mountain bike. The common small tooth cogs (sprockets) are 11,12 and 13 while the larger ones are 21 and 32.

Mountain bikes need tougher gears due to the inclines, declines, and offroad conditions that they are meant to tackle. Therefore, these bikes need more sprockets (cogs). The larger sprockets will make hill climbing easier.

To move the rear wheel of the bike, you need some force. This force is obtained from the rotating motion of the cyclist’s legs. When a cyclist applied this force to pedaling, it moves the arms (known as crankarms) to which the pedals are attached.

The crankarms are attached to the chainrings (one or more sprockets) which have teeth on the outside. The belt-like chain hooks onto these teeth, which in turn moves the rear wheel.

The Crankset is a part of the bicycle drivetrain. The general Crank arm length is 170 mm but can vary between 165mm and 180mm.

Derailleurs move the chain of the bike from one sprocket to another. They “Derail” the chain, that’s where they get their name from.

A freewheel is very similar to a cassette but has a different mechanism. A Freewheel enables the bike to cruise freely when the cyclist does not pedal. It is attached directly to the bike’s rear wheel. There can be multiple sprockets (cogs) or a single one in a freewheel. Sometimes, it might be referred as a block.

Both the chainring and the sprocket have an equal number of teeth –> The Gear Ratio is 1:1

This means that the rear wheel will rotate only once with each full rotation of the cranks.

This means that the rear wheel will rotate 2 TIMES with each full rotation of the cranks.

This means that the rear wheel will rotate only once with 3 FULL ROTATIONS of the cranks.

To move a bicycle forward, the cyclist has to apply force with their feet. The rider directly applies this force to a part of the crankset known as pedals.

There are a few kinds of pedals in the market today:

Selecting a gear means selecting the amount of strength and effort that a cyclist wants to apply to the pedals.

That component of a bike’s drivetrain system that decides the gear of the bike is called a shifter. Because it controls the derailleur movement through a cable, it can shift gears. It is also known as a Gear lever.

The shifters can be found on bike handlebars on both left and right-hand sides. The left shifter usually is for the front chainrings while the right shifter is for the rear gears.

These are the most frequent terms (parts) used to refer to various components and concepts while referring to a bike’s drivetrain mechanism. 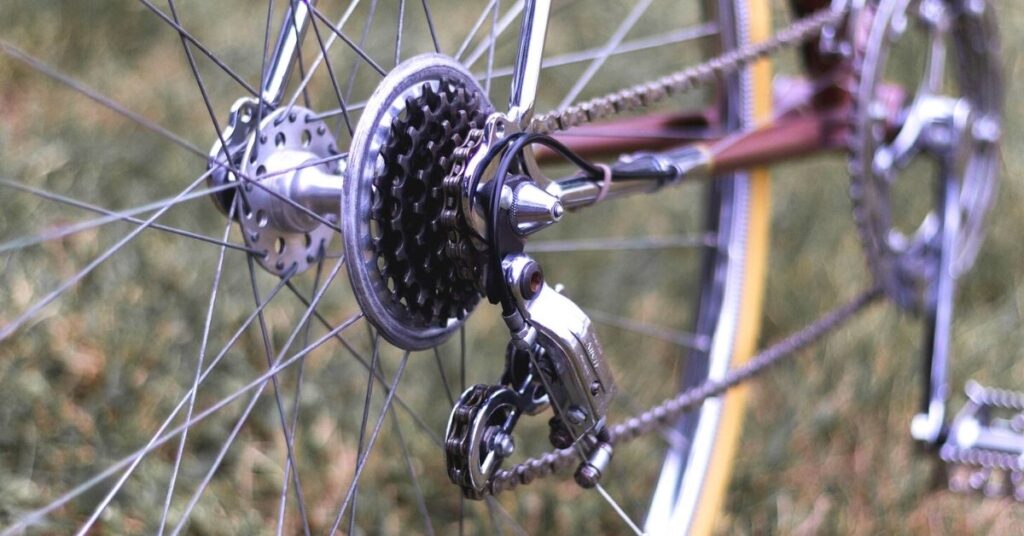